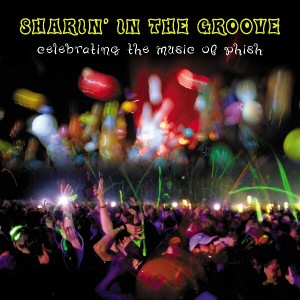 Twenty years ago today, the Mockingbird Foundation released the double-disc Sharin' in the Groove, featuring 23 artists who (with their studios, managers, producers, and more) donated their time gratis to record a Phish cover and help fundraise for music education for children. CDs still sell, believe it or not, and the digital tracks continue to raise grant funds every week, even 20 years later - and we encourage you to pick it up, at any of the 80+ outlets for it, from Amazon and the Apple Store to Spotify and beyond.

Sharin' in the Groove was unusual, as "tribute" albums go. Above all, the performers aren't bands influenced by Phish - it's the bands, acts, and genres that influenced Phish, from school bands (high school orchetra and college marching band) to the international champion barbershop quartet, and every manner of jazz, funk, soul, rock, pop, ballad, and more in between: Little Feat (who recorded "Sample in a Jar", then took it on the road) and the Wailers (doing their first track in over a decade, with their original producer); members of Talking Heads and Los Lobos; Son Seals and Arlo Guthrie - and Jimmy Buffet, with his entire Coral Reef Band.

And it's organized like a show, opening with a clean and vibrant cover of "Bouncin'" by Arlo Guthrie playing with a band that includes 2 of his kids, winding its way through a solid first set CD, then diving into some weirdness for set (CD) two - such as drum-n-bass masters Lake Trout reimagining a chunk of Picture of Nectar, and Japanese oddity The Boredoms mashing up "Free" and "End of Session" - before finishing out with the "Golgi" encore.

I remember buying this when it came out!

I really liked what Lake Trout did (and living in Baltimore at the time, saw them (or Big in Japan) play a lot) as well as the TomTom version of Sand.

Heh. That's me in the white hat on the cover
Score: 0

Phish.net is a non-commercial project run by Phish fans and for Phish fans under the auspices of the all-volunteer, non-profit Mockingbird Foundation.

This project serves to compile, preserve, and protect encyclopedic information about Phish and their music.

The Mockingbird Foundation is a non-profit organization founded by Phish fans in 1996 to generate charitable proceeds from the Phish community.

And since we're entirely volunteer – with no office, salaries, or paid staff – administrative costs are less than 2% of revenues! So far, we've distributed just about $1,500,000 to support music education for children – hundreds of grants in all 50 states, with more on the way.